Idris Elba arrives at the premiere of Mandela: Long Walk To Freedom at the Odeon Leicester Square in London, where the death of the former South African president was announced. Photograph: Steve Finn/Splash News/Corbis

Nelson Mandela’s daughter Zindzi  learnt of her father’s death while watching the royal premiere in London of Mandela: Long Walk To Freedom, which chronicles his life. 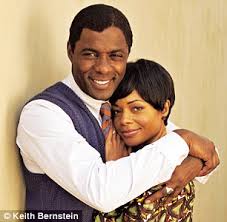 Zindzi Mandela took her seat alongside royalty, celebrities and fans of the former South African president to watch the film in Leicester Square. During the screening she was told her 95-year-old father had died peacefully at home.

Fellow audience members were not informed of the death until after the film.
Speaking before the screening, Ms Mandela said when asked about her father’s health: “He’s 95 years old and he is pretty frail. We are hoping to see more of him.”
After the film Idris Elba, who plays Mandela, took to the stage with producer Harvey Weinstein to hold a moment’s silence.
The star later released a statement: “What an honour it was to step into the shoes of Nelson Mandela and portray a man who defied odds, broke down barriers, and championed human rights before the eyes of the world. My thoughts and prayers are with his family.”
The Duke of Cambridge, with Kate beside him, also gave a sombre tribute as he left the cinema. “It was extremely sad and tragic news,” he said. “We were just reminded of what an extraordinary and inspiring man Nelson Mandela was and my thoughts and prayers are with him and his family right now.”
Weinstein said: “One of the privileges of making movies is having the opportunity to immortalise those who have made a profound impact on humanity. We count ourselves unspeakably fortunate to have been immersed in Nelson Mandela’s story and legacy.
“It’s been an honour to have been granted such proximity to a man who will go down as one of history’s greatest freedom fighters and advocates for justice.
“I have had the privilege of spending time with President Mandela and I can say his sense of humour was as great as his optimism. We are deeply saddened by his loss; our hearts go out to his family and the entire South African nation.”
South African Aure Tte, 30, said he was overwhelmed as he sat in his seat at the premiere while the announcement was made. “I cried for about 10 minutes,” he said. “I got a text message about 10 minutes before the announcement, so I was a bit shocked but I knew it was coming. There will be a definite feeling of loss in South Africa.”
Amma Kyei-Mensah, 52, said: “It’s devastating. But he’s an old man – we knew all year. It was so poignant at the end of that film; it’s such a fitting tribute.”

Naomie Harris and Idris Elba hit the red carpet at the Royal Film Performance of their new movie Mandela: Long Walk to Freedom on Thursday (December 5) in London, England.

The 37-year-old actress and the 41-year-old actor had the opportunity to meet Prince William and Duchess Kate at the event that evening.

Shortly after the premiere began, news broke that the film’s real life subject Nelson Mandela had passed away that day at the age of 95 following an illness he had been battling for many months.

FYI: Naomie is wearing an Alexander McQueen dress and shoes with Jessica McCormick earrings and rings.

How to make lemon tea cakes