FREEPORT, Grand Bahama –  A small plane crashed Sunday on approach to the island of Grand Bahama, killing all 9 people on board, the government of the Bahamas said.

The Lear 36 Executive Jet had taken off from the Bahamian capital of Nassau and crashed while attempting to land around 5 p.m. local time in Freeport, according to a statement from the Ministry of Transport and Aviation.

“The Department of Civil Aviation has been advised unofficially that the aircraft was destroyed and that there were no survivors,” the ministry said.

Names of the victims were not immediately available.

The cause of the crash has not yet been determined though there had been heavy rain across the region.

Police and fire authorities were on scene and a full investigation would begin at daylight on Monday.

The crash occurred as people were gathering in Grand Bahama for an annual Christian leadership conference. The Bahamas Tribune newspaper reported that Myles Munroe, a prominent Bahamian minister who organized the event, was among those killed, along with several other people who were in his delegation.

Chief Supt. Clarence Reckley said he could not confirm the report and that authorities were still trying to determine the identities of the victims.

Grand Bahama is about 70 miles (113 kilometers) east of Florida. 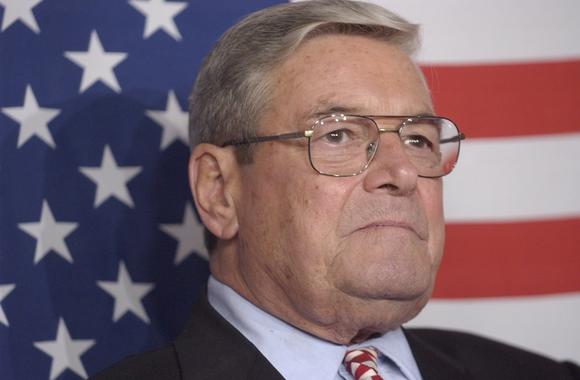 CHICAGO –  The chief of staff for Sen. Mark Kirk says longtime Illinois U.S. Rep. Phil Crane has died of lung cancer in Virginia. He was of 84.

Eric Elk says Crane died Saturday night surrounded by his children at his daughter’s home. Elk served on Crane’s staff when he was in Congress.

Crane represented Chicago’s far northwest suburbs for 35 years and was the longest-serving House Republican when he was defeated in 2004 by Democrat and then-political newcomer Melissa Bean.

The conservative was first elected to Congress in 1969 when a young Illinois congressman — Donald Rumsfeld — left to work for the Nixon administration. Crane made his name as an anti-tax crusader and ran for president in 1980.

He was preceded in death by his wife, Arlene, and a daughter.

MILWAUKEE –  Milwaukee police and the family of a 5-year-old girl fatally shot while sitting on her grandfather’s lap pleaded for the public’s help Saturday in finding the shooter, while also announcing the girl’s heart had been donated to help another child.

Police Chief Edward Flynn said he would keep a photo of Laylah Petersen in his chest pocket, next to the photos of his own grandchildren, until suspects are arrested. Laylah was on the couch when one of a dozen bullets fired into her grandparents’ home came through a wall and struck her in the head.

No arrests have been made in the Thursday evening shooting. Investigators have said they don’t believe anyone in the home, where Laylah was being raised by her grandparents, was being targeted.

Flynn said officers were getting good tips and canvassing the neighborhood for witnesses. He urged anyone with possible information to come forward, saying “at this point, rumors are as helpful as facts.”

He said the house may have been mistakenly targeted, but that several theories were being explored. Without elaborating, he said investigators were having some success with physical evidence and were “in a different place today than we were yesterday.” Police have said officers found a dozen casings at the scene, and were looking into whether more than one handgun was used.

The chief said his officers “are not going to rest until we find the perpetrators of this vicious crime to justice.”

Laylah’s relatives tearfully hugged officers during Saturday’s news conference, and her aunt, Tracy Martinez, said family was especially grateful to the first officers on the scene.

Family spokesman Richard Schwoegler III said Laylah’s heart had been donated. He also urged faith-based organizations to take to the streets in an effort build relationships with troubled people. Flynn said so far 11 children under the age of 13 have been shot this year in Milwaukee, compared to two last year.

A funeral is planned for Wednesday. A reward of up to $5,000 is being offered for information leading to an arrest and conviction in the case.