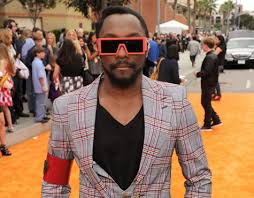 This was one of the maddest shows I have ever seen, like a cross between a big   budget sci-fi techno rave and an enthusiastic amateur revue. It involved   giant white heads with US pop star and The Voice judge Will.i.am’s   moving face projected on them, tuneless medleys accompanied by beats tapped   out an iPad, and a tongue-tied display of inept freestyle rapping. There was   also a half hour DJ set in the middle of the show with the star performer   spinning hyperactive remixes of other people’s songs and shouting   “LONDONNNNN!” and “Where’s my party people at?”

Fortunately for the visibly nervous American star embarking on his first solo   tour, his “party people” were right there, waving phones and luminous   glo-sticks in the air. The twenty thousand strong crowd loved it.