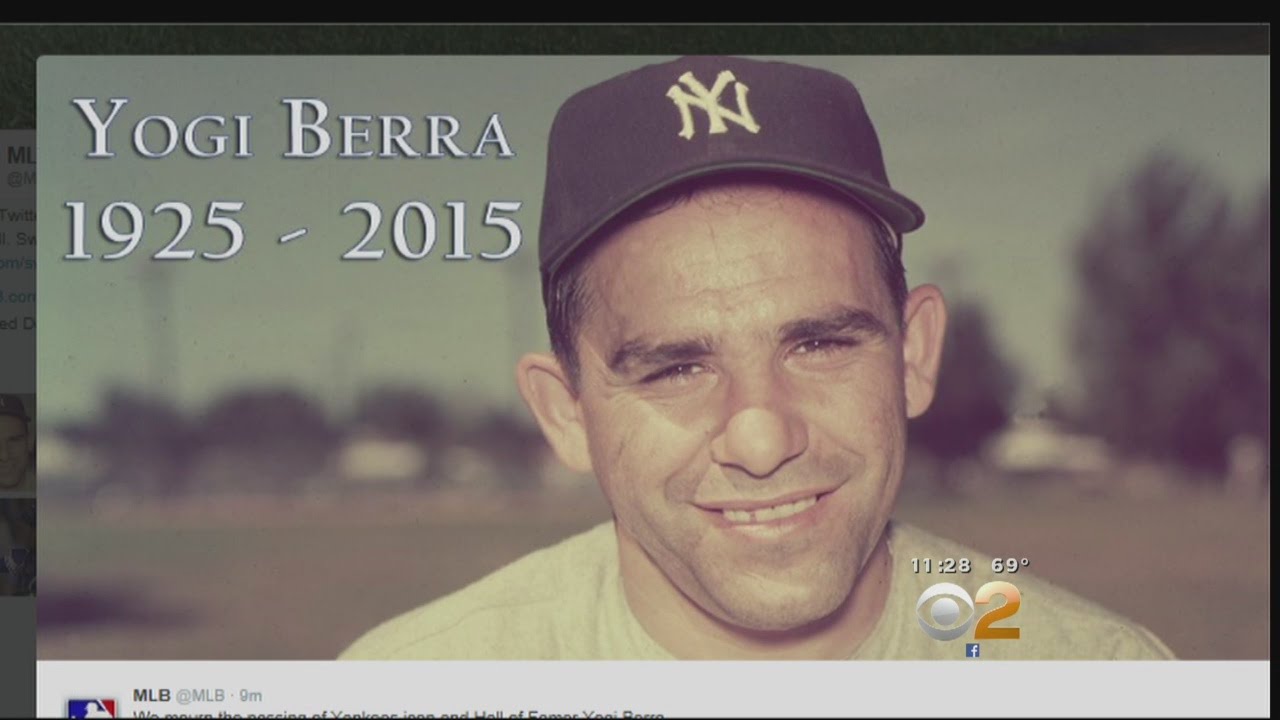 At 5’8″ with a paunchy body and mischievous smirk, Berra seemed an unlikely baseball hero. But the oft-quoted New York Yankees legend, who won three American League MVP awards and 10 World Series titles, is remembered as a clutch hitter and one of the greatest catchers of all time. He died Tuesday at the age of 90.

Berra died of natural causes at his home in New Jersey, Dave Kaplan, the director of the New Jersey-based Yogi Berra Museum told the Associated Press.

The beloved Hall of Famer — who memorably uttered “When you come to a fork in the road, take it,” among other malapropisms and contradictory phrases — was an essential part of the Yankees dynasty that dominated Major League Baseball from the late 1940s to the early 1960s and included other greats like Joe DiMaggio and Mickey Mantle.

Partly due to the Yankees’ success during that era, Berra, who was also a 15-time All-Star, established several Fall Classic records, including most games played, most at-bats and most hits. In 1957, he became the first World Series pinch-hitter to hit a home run.

Proving, as he said, “It ain’t over ’til it’s over,” Berra maintained a presence in the major leagues as a coach and manager — he is one of only six managers to lead an American League and National League team to the World Series — and became a symbol of New York baseball, past and present.

As a hitter, Berra would prove to have excellent coverage of the strike zone and incredible control of the bat. In five of his 19 seasons, he had more home runs than strikeouts and in 1950, he struck out just 12 times in 597 at-bats. He once explained, “If I can see it, I can hit it.”

Berra was equally celebrated for his skill as a fielder and baseball stat guru Bill James determined, using his win shares formula, that Berra was the greatest catcher of all time. He once went 148 games without making an error and famously caught two no-hitters, both by Allie Reynolds in 1951, and one perfect game, by Don Larsen in Game 5 of the 1956 World Series against the Brooklyn Dodgers.

The Yankee’s national popularity was such that an animated character – Yogi Bear – was named after him in 1958.

Berra initially ended his playing career with a 1963 World Series defeat to the now-Los Angeles Dodgers. He returned to the Yankees as manager in 1964 but was promptly fired after the team lost again in the World Series, this time to the St. Louis Cardinals.

Berra moved crosstown to become a player-coach for the New York Mets in 1965, but only took the field in four games. He became Mets manager in 1972 — the same year he was inducted to the Baseball Hall of Fame. Berra guided the Mets to the 1973 World Series, which they lost to the Oakland Athletics, before he rejoined the Yankees in 1976 as a coach.

Yankees owner George Steinbrenner hired Berra to manage the team in 1984 and fired him just a few games into the next season, prompting a high-profile falling out between the two men that lasted until the legendary Steinbrenner apologized and Berra once again returned to the Bronx.

In his later years, Berra was a fixture at Yankees spring training, and just weeks before his 84th birthday in 2009, he threw an historic Opening Day first pitch at the new Yankee Stadium.

Berra, who was also known to the public as a commercial spokesman for Yoo-hoo, Entenmann’s and other products, opened the Yogi Berra Museum and Learning Center at Montclair State University in northern New Jersey in 1998 and helped raise funds for the National Italian American Foundation.

Berra outlived many of his teammates and peers and had a reputation among several generations of players and fans for being generous, approachable and humble.

He is survived by his three sons, all athletes, and 11 grandchildren